Being an accident prone individual since deciding to take up running again after a 20 some year hiatus it has been a bumping and sometimes expensive endeavour. Numerous pulls and niggles have ensued as I have tried to drag this age old, battle weary body back into some form of running shape resembling the genetic blueprint laid down for us by our palaeolithic forefathers.

Many a system has been followed and gadget bought to repair the most annoying problem of constant calf strains whenever I decided I wanted to increase my running speed, distance or even enter a race. As many will be aware calf strains are a runners worst nightmare. Especially reoccurring ones.

Well push came to shove recently when I was about 8 weeks out from running in this years World coal Carrying Championships and I suffered another calf pull after being free of them for a good 6 months at least. I lay there once more on the massage table having yet more pain inflicted upon the area as the therapist first got their fingers deep into the muscle and then their elbow just so they could loosen the knots that were in there. All the while I`m thinking of why yet again this had happened? After all the money shelled out on regular massage sessions, foam rolling and numerous other supplements to save me having to go through this pain and anguish again.

As I hobbled down off the massage table and got dressed I decided I was finally going to do what I had been threatening to do for quite some time but had not because of the initial outlay.

I bought myself the TP Therapy Ultimate 6 Kit + Guidebook & DVD. 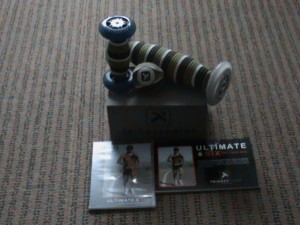 The products were purchased from the HFPT web-shop. And can I say the service was first rate. Emails were quickly and politely answered and the products arrived well packaged and in very quick time. I have since made further purchases and the service has been just the same. First class. There will be further updates of other TP Therapy items purchased from HFPT in future articles.

Eagerly I unwrapped the package like a child on Christmas morning and quickly got to work on reading the manual and other items that came with the products and getting the DVD into the DVD player. This was when the first issue arrived. The DVD just did not want to work in my DVD player. It would either not load at all or if it did load it would freeze midway through one of the sections. Upon inspection of the DVD disc there was no evidence of scratches just a feeling that the disc itself was too thick. I then tried it in my computer where it worked on the second time of trying.

The DVD has a number of options to choose from on the main menu so being new to this system of working I watched them all through first before following along to the trigger point program.

A word of warning first: If you have never experienced any form of sports massage or foam rolling / myofascial release type release then be prepared for a painful 30 or so minutes. Please do not be put off by that, it is just meant to help prepare you mentally for what is ahead and hopefully will not take you down the road of so many who purchase something within the fitness industry only to find it too painful or difficult and then the item(s) just end up in the back of the cupboard gathering dust or sold on Ebay.

This type of pain is good, depending on your perspective, which will show you where you have issues and help you understand how those issues can be rectified.

Each point of the workout started off with an explanation off were each of the TP Therapy massage tools had to be placed for maximum effect, how much pressure was to be applied and the various movements needed to work the muscle(s) that you were targeting at that point in the workout. At this point I would add that you people should spend sometime reading the various articles and explanations on the main TP Therapy website which will give the reader / user a better understanding of what lies ahead and why what they are purchasing and doing will be of great benefit to their long term health, well-being and mobility.

As I progressed through the workout it became evidently clear that even though I had been having regular sports massage and thrice weekly foam roller sessions, these were not enough to be of maximum benefit, going by the amount of new issues I was finding and at times the pain knocking the breath out of me especially in areas like the calf`s and IT bands.

At the end of it all I really did feel like I had been pummelled by a sports massage therapist and was considerably looser than when I started. The work on the legs could only be described as leaving them quite jellylike as if after a heavy squat session.

My only beef with the DVD workout was that at times it is difficult to see precisely how the massage tools should be placed when working areas such as calf`s and Psoas muscles which would have benefited from close ups. Especially for those with limited knowledge of the muscles or of massage techniques. This I feel would speed up a users success with the program and limit any potential mishaps from positioning the massage tools incorrectly. And after a few months use I have noticed the baller block starting to sag & loose its firmness which is leaving me feeling that a replacement is going to have to be purchased very soon.

I continued to follow the program as recommended for the remainder of my time leading up to and after this years World Coal Carrying Championships which saw me successfully complete the race injury free and attain my highest finishing position thus far. With a couple more outings in 10k races, both of which again have seen me complete them injury free and setting new personal bests.

The TP Therapy program and products are in my view a valuable addition to any ones training arsenal. I would not recommend completely stopping having sports massages as I feel that they compliment each other greatly. What is would say is that the need for these massage sessions is greatly reduced and saves the user quite a lot of money because the TP Therapy program gives you the tools and knowledge to take more control of your bodies well being. And with that comes a greater appreciation of the greater mobility and reduced instances of injury you will see for yourself happening over time.

In future updates I will be reviewing my use of other TP Therapy products I purchased following my success with this program.