The Legends of Sherwood night race is situated in the picturesque Sherwood pines. A beautiful area that you wouldn’t expect from first looks to be the beast it was to run in in the black of night.

There were five in the team and no I’m not meaning the “Famous Five” but then again that could be an option name wise for future outings.

Pre race nerves were the norm with Tom requiring some delicate IT band manipulation that brought howls of laughter to all and sundry and winces, tears and a lot of moving up the bench to escape from my probing thumb by Tom. I think from now on in Tom will have to be referred to as “ITB”.

Stay Alert gum, from my favourite energy store Candy Hero, was handed out about 30 minutes before the race started and help to give everyone that little bit of extra focus needed for the job at hand. It went down well apart from the cinnamon flavour which I found was a required taste. Looks like I’ll have to invest in some mint flavoured supplies for future runs. Discount code: SPARTAN-F3HA for 5% off all orders.

With about 20 minutes to go everyone went through their own personal warm up regimes and then we moved on towards the starting line so we could get a decent place and not get stuck at the back when the gun went off. As with all races the obligatory rules, regulations and general information was put out by the MC and then we were hit by a shock. It was announced that there was a thousand runners in this race alone. That sent a panic through me knowing what its like from previous racing experience of getting caught up in the main bunch and loosing a lot of valuable time. It goes without saying that you’ll always get some numpties who pile to the front who really should not be there because a kilometer in they’re blowing out of their rear ends because they’re way out of their depth and are holding faster runners up.

The countdown began and then we were off. We’d already decided as a group what the tactics for the day would be. Donal and myself would be going hell for leather to see what we could manage whilst Kieran, Matt and Tom who were all carrying slight injuries would go at the pace they felt most comfortable at till they felt sure enough to start opening up the engines and going for it. Within 50 yards we hit a wall of hay bales which brought the runners to s standstill as everyone attempted to clamber up and over as fast as possible. Once on the other side you could open up the legs again and hit the trail

Without going into extensive detail of each and every twist, turn and switchback I think its best to summaries the whole race.

The overall course was fantastic, well laid out with challenging areas as it took advantage of the surroundings. Some of the switchbacks were wicked and really shredded the legs as you hit steep hills and slopes which were just as evil on the way down. You had to be very canny and plot your route with care because as we found out a slip or trip could be painful as we saw one individual in extreme agony at the side of one dirt slope. The way the course was laid out it was near on impossible to overtake in the wooded areas and being in the dark made it doubly hard. Because of that Donal and myself would hang back slightly in the spooky woods running in packs and taking advantage of how every runner took care of the runner(s) behind them with calling out whenever a stump came into view or a branch was going to spring back. And there were lots of branches swinging back as we all found out with numerous bruises on our forearms as you protected your face from getting branch slapped.

Once out of a wooded enclave you could unwind the legs and pick off the prey as you made your way through the pack, pushing and pushing to get as far as possible before the next wooded trail had you pulling on the brakes and easing off the gas. To once more be in a dark confined space with numerous hazards, running at speed in the dark.

The obstacle to end all obstacles was the swamp. Oh geez what a place. Small but mighty. You could smell it before you saw it. It was like some hole that arced back to the primordial soup from which we all came. It was disgusting and you had to get down into it and under the logs which left you covered from head to foot in this putrid mess.

Unless of course your name happens to be Kieran who took the meaning of “soup” quite literally and as his head was bobbing underneath one of the wooden cross beams he kept his mouth open as a Tsunami of sludge made by the runner in front slammed into his face, mouth and the back of his throat. There was a lot of retching and even more retching at the end as it became the joke to continually mention the sludge, how it could be infested with dead animals and various other nasties and have Kieran relive the experience and proceed to bend double in a retching encore upon encore.

As the race wore on it wore you out. The race had been advertised as 10k and a bit. Well it was a bit, I would have had it at least 11k maybe 12. By the final few areas where you could get up a burst of speed it was agony in the legs. As we hit the final stretch a few more obstacles were thrown at us to beat the last bit of life out of you. The worst being the two wall you had to scale before hitting the the finish line. As we approached these all I could hear from the side of me was Donal screaming his lungs out as he attacked each wall. Me I got over the first wall and only just managed to drag my weary body over the second.

Once your over the finish line its off with the timing chips and your handed a bottle of water and a chocolate bar. Me I got a Marathon (showing my age) and it last all of about 3 bites as we waited for the rest of the gang to finish. As we waited the MC announced the 100th finisher and it was at that point me and Donal realised we’d cracked the top 100. Something I’d been secretly harboring as we tore through the course. Top 250 would be an achievement and all of the gang managed that. Top 100 would be a major accomplishment given there was a thousand runners competing.

After everyone was back safe, sound and covered in sludge it became quite evident that everyone had given everything. Cold and exhausting was setting as was hunger so the planned feeding as we checked out the after party became an after thought and it was priority that we got off the wet clothes and into clean, dry ones asap.

To say everyone enjoyed themselves was an understatement and a credit to the organisation of the race. With everyone having the same opinion of more races of this nature had to be run.

After thoughts: We all agreed that the course needed more obstacles. The layout of the trails and distance was just right but we had all expected more in the way of things to climb over, under and through and it was a little disappointing on that front. The hay wall was in the wrong area. It caused far too much of a bottle neck at the beginning and any decent runners unfortunate to get caught behind slower runners are further up the starting pack would have lost a lot of valuable time. It would have been much better either midway or right at the end of the race before you hit those two wicked walls.

Race numbers we found were not really needed especially after you’d gone through the swamp with large numbers of people either loosing them because of them being dragged off with being soaking wet or completely covered in the sludge and unreadable. A much better option would have to done what was done at the Spartan race we attended and write the number on forearm and forehead of each runner. All your details are in your timing chip so the race number just seems surplus to requirements.

The biggest letdown seems to be the photography. We understand that shooting pictures in the dark has its problems but after trawling through them all we’ve found that there’s a distinct lack of quality pictures for each racer at each position. Something we didn’t have at the Spartan race which showed clear pictures at each obstacle for each racer.

Overall though we want to do more and have penciled in at least two of these notorious night runs for next year and highly recommend you do too. 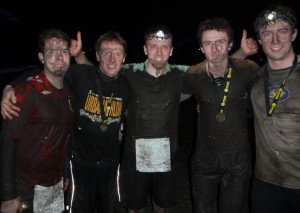 Steven A Barlow, Co founder www.spartan-warriors.co.uk and founder of Spartan Runners “because we don’t just run” © 2012