Who would have thought 12 months would go by so quickly and it would be Spartan race time again?

This year we where running at Deverell barracks in the 5k elite race. 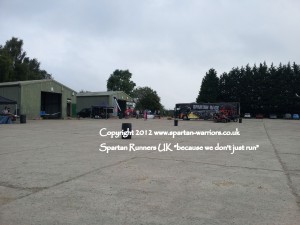 We got there bright and early. In fact very early. So early most of the volunteers hadn’t even arrived. Now that’s enthusiasm for you. After last years efforts in the Midlands Spartan Sprint myself & Kieran were pretty much fired up for this one and looking to go beyond what we did previously. 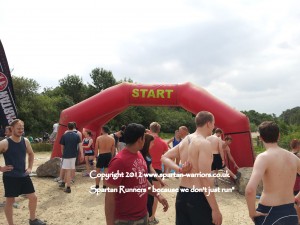 We mulled around for a while. Made the many customary trips to the toilets as our bodies seemed to understand the oncoming onslaught and wanted to be devoid of anything and everything that it was carrying. Once on the staring line you could sense the nervousness and hear its laughter from all around as people awaited the off. Me I decided once again to have an adrenaline dump with pre race anxiety and felt pretty much wiped out like I did early this year in the world coal carrying championships.

Not the best start I can tell you and one that needs fixing.

One highlight of the days events was to be during the elite event , which we were running in, with the field being lead of by an Olympic torch bearer. Nice touch we all thought.

Then we were off but I’ll save you all from a complete obstacle by obstacle breakdown like I did in last years review and concentrate more on the whole rather than the sum of its parts. 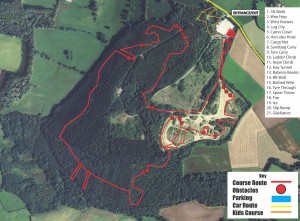 Kieran had already told me to not concentrate on where he was at during the race and to just leave him and concentrate on my own goal for the day which was to the make top 10% or even top 10 finish. So off I went.

The course as expected started off with the usual sprint from the start and then gradually lead into the obstacles themselves with the usual pushing and shoving as people jostled for places. The first major hiccup came after the wrist breakers as we went into log city. They were just too close to each other and created a bottleneck which everyone pointed out that was in my group as we waited to get through. Probably cost us around 15 seconds.

The sandbag and tyre carries were nothing short of torturous and being so close together left you blowing out of your rear end as you slogged it up the almost vertical inclines to complete each obstacle. these were so hard and slowed down. I could see Kieran on this section as I came up one run he was going down the other. Beautifully positioned for maximum effect.

On the rope climb dummy here thought he was close to the bottom so let go on the rope. A split second later he realised he wasn’t and had to grab the rope again which resulted in a very nice and sore rope burn to his finger. A few choice words were muttered as I ran on.

Unfortunately an injury was going to surface again as I came up to the hay tunnel. As I ran forwards I started to crouch down to enter the tunnel but as I did so I stepped into a puddle of water and a stone submerged there. As you would expect I rolled over on my ankle with the resulting sickening pain feeling washing over me. With a few well chosen words I hobbled around in a circle at the entrance trying to assess the damage and see if it would walk off. It felt better than I first feared so into the tunnel with smelly fly ridden water and all. Later on during the barbed wire section I entered quite a lot of deep cold water which brought some relief from the pain. 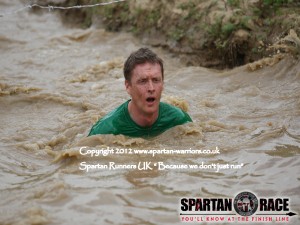 Even the very deep mud at times helped give a cooling effect as I waded through that. I have to say I hated the mud on those areas. Very heavy, sucked you down and took it out of already tired legs. You could see why this was a military course. It was beautifully brutal. 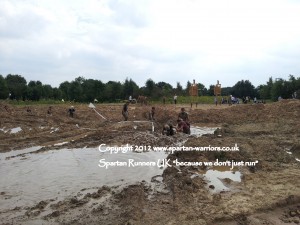 So with a sprained ankle I continued on for a further nine obstacles, nearly half the course, fuelled by adrenaline and my favourite pre race formula. I can assure you my mood hadn’t changed. A lot of choice words were used. I was hurting more than I can remember and at a couple of points I was close to throwing up with the lactic acid build up. Kieran I knew not were he was in his own battle with the course but I was confident he would be pushing through.

All the time I was running I had no idea were I was placed I just knew it was taking longer than anticipated. As things would have it we covered over the advertised 5km and did 6.3km. All I do know id that I had managed to pull a few other runners in, pass them but at the same time because of the tiredness that was now setting in I couldn’t pass the last few I saw up ahead. As I came up to the spear throw it all went terribly wrong. I missed and was subsequently penalised with a 20 burpee punishment. This cost me two places as I heard two more runners come in and complete the task. I was mightily ticked off with myself at this point.

Over the fire jump we went with some trepidation as I took off on the injured foot and knew that the height and momentum of the jump was going to cause discomfort on the other side. 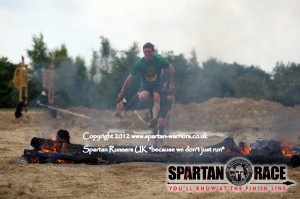 Then in to the very thing I hate most…ICE!!! 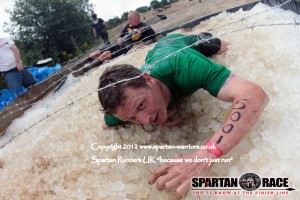 Now nearing the end, mentally, physically and the course. With some more running on road and then through a wooded area we hit the dreaded slippery wall climb. 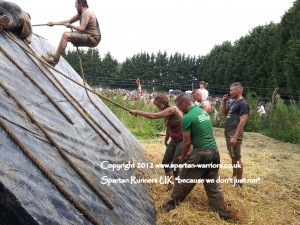 What a slippery mess that was. I took what I thought was a decent path and rope only to find the rope covered in slime and after a quick glance sideways noticed the next rope along was cleaner. Oh the joys of it all. Up and over we went to find on the other side they had put two rows of wood across to aid with getting down.

I found it didn’t.

Lets look at it this way, your covered in mud, soaked to the skin, exhausted, moving at considerable speed and your trainers now have a lovely coating of industrial washing up liquid. To say I went down with a bump is an under statement. I hit the bottom after my hip and glute banged off the wood with an almighty thump. Dead leg setting in and pain shooting all around my hip and pelvic. Whilst I can understand why they decided to add the wood I don’t think its the best idea. far too easy to cause damage to a runner than just sliding down into a mass of straw at the bottom of the other side. 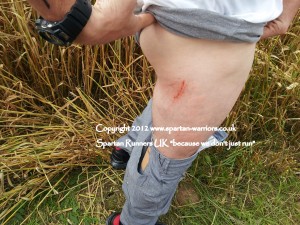 Whilst excessive bruising never materialised the pain deep inside my gluteus and pelvic region has been pretty severe. The swelling was similar to having half a tennis ball strapped to the outside of your hip. There’s a lot of muscular trauma there that’s for sure and a lot of time needed for it to heal fully. With that in mind I do hope that the organisers consider taking the wood off as it can cause more injuries that it could save.

Then it was a nice smack in the face with a pugil  stick from a Spartan gladiator and over the finishing line we went. Practically bent over double I managed to get my finishers medal, cup of water and t-shirt. Then it was off to get hosed down and get the rope burn treated. All the time continually look back towards the finish line to see if Kieran was finished.

After being treated by the first aiders I started to wonder down to the finish and say Kieran perched on top of the slippery wall helping a female runner up and over the top. What a gentleman.

As you can imagine there was a lot of jubilation as we met back up and quickly blurted out what we ‘d just been through. Once more the sense of achievement was overwhelming even though we’d come into this race with some knowledge of what we were about to do. 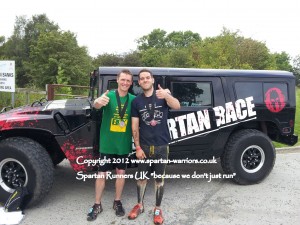 With the customary swapping of tales we made our way back to the car the dry off and get changed. Then back to the start line to cheer on fellow runners and get our provisional finishing times.

The sense of achievement and camaraderie is second to none at these races and it was clearly evident as we talked to many a finisher after the race.

As Spartan Race says “You’ll know at the finish”

“You’ll know at the finish that you’ll be back for more”.

On the flip side I would like to point out a few things that I think could go to improve the whole experience even more.

Stop the quad bike riders from tearing around the place as if its Brands Hatch. We not there till November and there were a couple of instances that we saw when the riders were flying into the registration area far too fast and at one point went whizzing past a couple with their kids. Not clever but very dangerous.

No finishing times for the season pass holders. This seems to be an issue that’s plagued other races and you would have thought that with all the data coming straight off the timing chips as we pass the finish it shouldn’t be an issue. Nothing worse than not knowing how well you’ve done after putting in a Herculean effort. I’m surprised they don’t have a second computer hooked up to the program they use so that all this data can be collated and finishers can get their times practically right off the bat.

As mentioned above remove the wood off the slippery wall. With races being so close together the last thing you need is an unavoidable injury like the one I sustained. Cuts and the odd bruise or three are expected but not smashing yourself up like I did on that wall.

How about giving people black t-shirts instead of white? We had white last year. Loads of people use them to race in and white is a bitch of a colour to get clean after going through these types of courses. They just end up ruined when a lot of people are proud to have earnt them and wear them.

How about a bit more after race entertainment? You see all the time people will finish, get cleaned up and nearly always come back in to see other racers finish or generally mull around and swap stories with other runners. Everyone is that high on adrenaline and endorphins it seems a shame not to take advantage of such a big feel good factor that everyone has and for people to be able to spend more time together.

But with all that said and done a thoroughly enjoyable day and both I and Kieran are looking forwards to the Midlands Super Spartan.

All photographs of the day can be found here and can be downloaded free of charge which I thought was a superb idea by the organisers.

Steven A Barlow, Co founder www.spartan-warriors.co.uk and founder of Spartan Runners “because we don’t just run” © 2012

This entry was posted in General. Bookmark the permalink.