Having recently completed a Spartan Sprint, as posted here, I thought that this years competitive running was over. Then I came across an advert for something I’d never seen before The Urbanathlon. With enthusiasm still high after the Spartan Sprint I signed up for their first ever winter event.

I can’t say I altered my training in the lead up to this race as I was already in a peaking phase and the only issue I had was one of peaking too soon and having nothing left for the race itself. This seemed to become evident on the Tuesday before the race when I had an horrendous workout which left me utterly drained and I hadn’t done very much. It was time to call it quits for the remainder of the week with only rehabilitation exercises and stretches being the order of the day as I tried to unwind and allow my body to catch up with itself.

The day of the race arrived and again preparation was not the best. Broken sleep from a sickly child. Tight calf’s and back. It was pouring with rain and the wind was howling. Then as I started to pack my kit away I found to my horror that I had pulled the sole off my runners and their it was flapping at me and I was about 2 hours away from setting off. Ah well, out with the gorilla glue and a hope for the best.

We arrived at the race about 90 minutes before the start of the race to sign in and went to have a look around at what was install. To be honest there wasn’t much to see and with the weather as it was all I wanted to do was keep covered up and go through an extended warming up session. Warming up was as normal with various strides and stretches and a gentle jog around the boating lake. During the warm up I started to consume my usual pre race caffeinated products that I purchase from Candy Hero (please use discount code SPARTAN-F3HA for money off any purchase).

About 15 minutes before the start there was a group warm up given by a Zumba coach. Not for me, so I continued to do my own thing until we lined up at the start.

Then we were off.

The race was to be 2 laps of a 2.5km course around a picturesque park in Manchester. Not long after we set off we came to the first obstacle and at that point, so close to the start, I thought we were going to be in for a tough race. Without going into a complete breakdown of each and every aspect of the course I’ll just give a general view of what was on offer. Compared to the Spartan Sprint the obstacles we based more around speed and agility with a lot of them being simple climbs or bounds over fences or cars. Obstacles hard enough to slow you up, make you think how your going to tackle it in the quickest safest way possible.

With the first lap completed I realised that I had set off to cautiously because I was expecting something similar to the Spartan Sprint and as I started the second lap I realised I needed to step on the gas a lot more. Lets just say the second lap was fun. I knew what was ahead and how I was going to clear them so I could really attack the course and claw back a few race positions on my way.

As I crossed the finishing line there was an initial reaction of “was that it?” and a feeling of being short changed. An hour of driving to do a race that took less than half that time. I just didn’t feel satisfied.

I collected my t-shirt (picked up the wrong size…doh) and wandered over the the area set aside to give racers a free rub down afterwards. ll that put a smile on my face as I ended up being done by three women who did a wonderful job on my tight calf’s and a nasty trigger point in my back. Then it was time to down some post race nutrients and re-hydrate before the drive home.

I spent quite some time thinking about how I had felt after initially crossing the finishing line and it dawned on me. I had set my expectations too high by judging one race by another and when it didn’t deliver my expectations it left a sour taste. But it wasn’t like that because as I came around after the race I was left with a sense of how much fun it had been to be able to just run as fast as possible with obstacles to tackle that were not going to leave you battered and bruised as some adventure races do.

It was fun, I loved it and cannot wait to do one again. 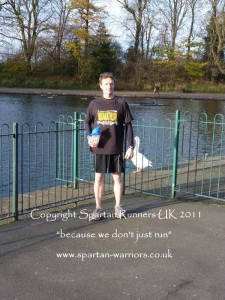 The organisers  had gotten the mix just right.

My only issue was that (and this is not aimed solely at the Urbanathlon but all races) is that there is very little for the spectators to do once the race starts and I feel that to make racing more appealing then this should be something to consider because there is nothing more off putting than seeing your racer set off then spend what feels like an eternity waiting for them to them come back over the finishing line.

All in all it was a great race and one I highly recommend not only for entry level adventure racers but even seasoned racers who fancy doing something simply for the fun of it.

Steven A Barlow, Co founder www.spartan-warriors.co.uk and founder of Spartan Runners “because we don’t just run” © 2011